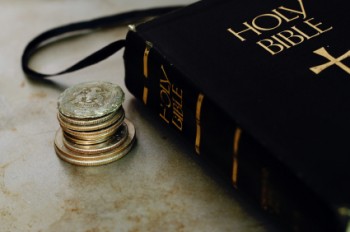 Previously I presented the Old Testament directives for giving; now we’ll turn to the New Testament.  In Matthew 6 Jesus says this: “When you give to the needy, sound no trumpet before you, as the hypocrites do…”  It is important to note that He doesn’t say if you give, but when you give.  Jesus simply assumes it.  In fact, there’s nowhere that Jesus tells us that we shouldn’t give to the Lord’s work.

After Jesus’s ascension, in the early days of the Church, we see His people giving generously.  There is that amazing passage in chapter 2 of Acts: “And they began selling their property and possessions and were sharing them with all, as anyone might have need.”   Chapter 4 again talks about the giving and generosity, and says that there wasn’t a person in need; everyone gave, and those who had need received.

The Apostle Paul in his letters presents both general and specific guidelines for giving.  For example in 2 Corinthians 9:6-7, we find a believer’s right response to an expectation for giving:  “Now this I say, he who sows sparingly will also reap sparingly, and he who sows bountifully will also reap bountifully.  Each one must do just as he has purposed in his heart, not grudgingly or under compulsion, for God loves a cheerful giver.”

In 1 Corinthians 16:1-2, Paul directs a systematic plan for giving.  “Now concerning the collection for the saints, as I directed the churches of Galatia, so do you also.  On the first day of every week each one of you is to put aside and save, as he may prosper, so that no collections be made when I come.”

Finally, Paul gives the three specific elements of giving in 2 Corinthians 8:3:  “For I testify that according to their ability, and beyond their ability, they gave of their own accord.”

There are many other places we could go beyond these few passages, but the Old and New Testaments clearly teach and model giving.  Giving is also one of the themes of the New Testament epistles—giving because the Lord has given to us and giving as the Lord has given to us.  So our giving is to be free.  Even though we are told to give, we are to give freely, and not under compulsion.  We are to give cheerfully.  That verse wraps up with saying, “God loves a cheerful giver.”