Habits are powerful things. They can be good or bad depending on the type of habit. For example, most people would agree developing the habit of practicing personal hygiene is a good thing, but being in the habit of not doing that is not so good! Webster’s dictionary defines the word habit as “a pattern of behavior acquired as a result of frequent 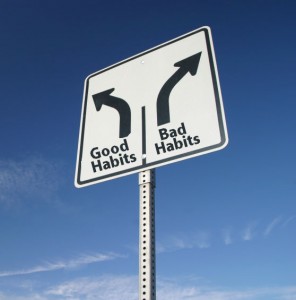 repetition.” If you think about it, all of us are creatures of habit. Our habits, for the most part, define and describe us! Jesus echoes this in the Sermon on the Mount when he describes how to recognize false teachers and, by extension, the truly saved versus the unsaved: “You will know them by their fruits” (Matthew 7:16). Jesus uses the term fruit as an illustration of what their life produces, the attitudes and actions they display as the pattern of their lives. And the root of that fruit is what resides in our hearts. There is a very insightful saying about the cause and impact of habits we all would do well to memorize: “Sow a thought reap an action, sow an action reap a habit, sow a habit reap a character, sow a character reap a destiny.”

God designed us with the ability to learn and establish habits. Psalm 139:14 rightly declares that we humans…”are fearfully and wonderfully made.” One of the many wonderful things God did when He made us was to instill in us the innate ability to form habits. What a blessing! Imagine what life would be like if we could not form habits. Things like tying your shoes, brushing your teeth or driving a car would require repeated, focused concentration. We would be regularly burdened by the simplest of tasks. I remember my dad teaching me how to drive a car that had a stick-shift. In the beginning it was a fiasco! It was awkward and difficult for me to get a handle on it. My dad almost strangled me a few times! After tons of practice I developed the habit or skill-set (pattern of behavior) needed to drive a stick-shift with ease.

Habits, both good and bad, are things that are hard to break. They are deeply engrained in our humanness. As a result of the Fall the inner drive to sin creates a fertile ground for the expression and establishment of ungodly attitudes and actions. Even after conversion to Christ many of those sinful habits and patterns of life remain.

In Romans 7:19-23 Paul describes every Spirit-born believer’s struggle with the old self – the sinful attitudes and actions that remain present after our conversion to Christ: “For the good I want, I do not do, but practice the very evil that I do not want. But if I am doing the very thing I do not want, I find then the principle that evil is present in me, the one who wants to do good. For I joyfully concur with the law of God in the inner man, but I see a different law in the members of my body waging war against the law of my mind and making me a prisoner of the law of sin which is in my members.”

I highlighted the phrases “members of my body” and “making me a prisoner to the law of sin which is in my members” because it uncovers the root of the problem. It is really helpful to understand what Paul is getting at here. Paul is not speaking of the body as sinful in itself but rather as the locus of the problem, the base of operations for the “principle of evil that is in me” (Romans 7:21). Before Paul, you, and I became Christians, we naturally habituated our minds and bodies to sinful patterns of living. Because each of us naturally indulged the body’s desires in various sinful ways, we became enslaved or habituated to them so that after conversion many of these deeply engrained habits continue to come forth naturally. But all is not lost! The wonderful thing is our brains and bodies can change! The Holy Spirit and the Word of God have come to repattern and remold our minds and bodies. The struggle of Romans 7 does not always end in defeat. Victory over bodily temptation, rebellion and sinful ways of living is always possible for the Spirit-filled saint as Romans 8 declares:

“But if the Spirit of Him who raised Jesus from the dead dwells in you, He who raised Jesus from the dead will also give life to your mortal bodies through the Spirit who dwells in you. So then, brethren, we are under obligation, not to the flesh, to live according to the flesh- for if you are living according to the flesh you must die, but if by the Sprit you are putting to death the deeds of the body, you will live” (Romans 8:11-13)

When God saves us, we enter our new life with lots of old baggage that needs replacing!

“that in reference to your former manner of life, lay aside the old self, which is being corrupted in accordance with the lusts of deceit, and that you be renewed in the spirit of your mind, and put on the new self, which in the likeness of God has been created in righteousness and holiness of the truth” (Ephesians 4:22-23)

Ephesians 4:22-23 is one of many New Testament passages that teaches something called the “put off/put on” dynamic (Ephesians 5:4, 11; Philippians 4:6; Colossians 3:8, 12, 13, 14; Romans 12:2). It provides us with an often poorly understood and frequently neglected biblical practice showing us how to truly replace sinful habits with godly ones.

I. It is our love-driven duty and task to progressively become what we are, that is, to become more and more practically what we already are positionally in Christ! (2 Corinthians 5:17; Galatians 2:20-22; 1 Timothy 4:7)

1) Scripture tells us repeatedly we don’t stop sinful habits by trying not to do them but rather “put off the old by putting on the new”! We replace the old ways by habituating ourselves to the new godly habit or pattern of living (Ephesians 4:23).

2) 1 Timothy 4:7 says “train” or ”discipline yourself for the purpose of godliness”… and 2 Timothy 3:16 says that Scripture is profitable…”for training in righteousness.”

3) When is a liar not a liar or a thief not a thief? (Ephesians 4:25, 28) When he/she stops lying or stealing? No! When they are truth tellers and those who pull their own weight! Why? Because they have not exchanged their old ways for new ones…remember Romans 8:13, “if by the Spirit you are putting to death the deeds of the body you will live.” Paul is talking about putting off old sinful habits or patterns of thinking and behaving that remain engrained in us. We replace the old self day by day through intentional, Spirit-enabled training in righteousness.

II. Getting to the heart of the matter:

In Ephesians 4: 22 we see how to do this. Let’s say you struggle with laziness. Paul would tell us to:

1) Moment by moment…be renewed in the spirit of your mind. Habit formation begins with your thought-life. As thoughts of being lazy arise, commit to replacing thoughts of avoidance or procrastination with the right thoughts. Seek immediately to depend on the Spirit, obey what God’s Word says and what your conscience is telling you! Purpose in your mind to get stuff done right then. *(sow a thought reap an action)

2) Next put on the new self …practice the Nike method of spiritual growth…just do it! Over and over. Seek every day to practice the opposite of laziness…getting stuff done! If you fail to do it, just keep getting back on the bike until it becomes who you are…a person who gets stuff done! *(sow an action reap a habit)

3) Over time, by the grace of God and some holy sweat, Scripture declares you will replace ungodly attitudes and actions with godly ones. They will become the pattern of your life! * (sow a habit reap a character…sow a character… reap a destiny!)

As Paul was speaking to the whole church at Ephesus, he was also exhorting the body to do this together. Seek to confide and partner with a close, trusted brother or sister as you pursue putting on the new self. We all need to encourage and help each other stay on course as we replace sinful habits with godly ones!

…”be renewed in the spirit of your mind, and put on the new self, which in the likeness of God has been created in righteousness and holiness of the truth” (Ephesians 4:23)