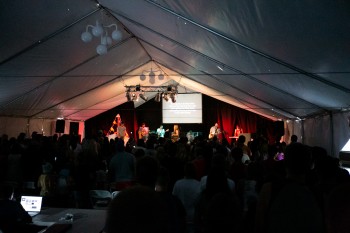 As I pulled out of the FBC Temecula parking lot last month right in front of the buses headed off to Summer Camp 2012, I couldn’t help but be thankful. Thankful for our church body and more specifically, thankful for the body of Christ!

Having gone to camp for the past several years, it was a bit strange on Thursday evening to not have to worry about packing sleeping bags, towels, sunscreen and clothes for my family.

It gave me some extra time to reflect on attributes of the fellowship of believers mentioned in Acts.

(Acts 2:44-45 – “And all who believed were together and had all things in common. And they were selling their possessions and belongings and distributing the proceeds to all, as any had need.“  Acts 4:32, 34 – “Now the full number of those who believed were of one heart and soul, and no one said that any of the things that belonged to him was his own, but they had everything in common. There was not a needy person among them, for as many as were owners of lands or houses sold them and brought the proceeds of what was sold and laid it at the apostles’ feet and it was distributed to each as any had need.”)

I saw glimpses of this each Sunday over the past month as several different families came up to give me anonymous donations to go towards students & staff who didn’t have additional funds to pay their ways to camp. There were students who found work as well as different fundraisers to earn money to help send themselves, their siblings and their unsaved friends to camp. There were well over 100 adults who took time off of work to go up to camp to serve.  The MAD (Moms & Dads) crew, staff, pastors and interns have worked countless hours planning, prepping and organizing camp activities with the main focus being on preaching Christ to students ranging from those who have heard the Gospel hundreds of times to those who are hearing it for the very first time!

I love seeing how, when God’s plan for the church and our lives is executed in the way He desires, it results in ultimate joy!  1 Peter 4:10-11a commands us: “As each has received a gift, use it to serve one another, as good stewards of God’s varied grace: whoever speaks, as one who speaks oracles of God; whoever serves, as one who serves by the strength that God supplies – in order that in everything God may be glorified through Jesus Christ.“

Someone who went to camp for the first time last summer said to us on the day that we returned home, “I have never seen a group of people that large function like such a close family.” We are so blessed to be part of the family of FBC! Let’s be thankful!!