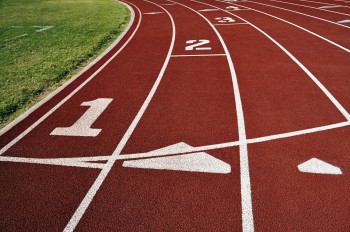 In 1 Timothy 6:6, the Apostle Paul says, “Now godliness with contentment is great gain. For we brought nothing into this world, and it is certain we can carry nothing out.  And having food and clothing, with these we shall be content.”  He tells the Philippians in 4:11, “Not that I speak from want, for I have learned to be content in whatever circumstances I am.”

By the time I reached junior high, I discovered that I could run faster than almost everyone in my school.  I don’t remember anyone ever beating me in a 50-yard dash, and in high school, few in my city, region or state could break the tape ahead of me in the 100.  Beyond those distances however, my winning quotient dropped dramatically.

Though I was able to run short sprints at an elite level, I did not possess the endurance and strength to run longer distances and meet the same standards.  Instead of being content with my ability as a short sprinter, for most of my high school track career I longed to be like my best friend Ron, who was a great 220/440 runner.

In the richest large society, with the most balanced distribution of wealth the world has ever known, many of us are not content in another area of our lives–our financial position.  The tendency is to look at others—as I did with my friend Ron—and want what they possess, or at least desire more of what we don’t have.  Sadly, even Christians can become discontent with their position in the wealth continuum.

In order to “keep up with the Joneses,” many are willing to compromise biblical admonitions.  Instead of sacrificing for the Gospel, their discontent leads them to, as John Piper puts it, “overindulge in the world.”  Author and Christian financial advisor Ron Blue says that the principle manifestations of this are an obsession for personal career success and excessive debt.

Paul goes on in Philippians 4:11 to define the circumstances in which he was content.  “I know how to get along with humble means, and I also know how to live in prosperity; in any and every circumstance I have learned the secret of being filled and going hungry, both of having abundance and suffering need.”  So what is Paul’s secret?  “I can do all things through Him who strengthens me.”

So there you have it.  Paul knew what it was to live at both extremes of the wealth spectrum.  It mattered nothing at all in terms of his ministry where he stood in the wealth pecking order.  Instead, with Christ’s power he lived sacrificially (Colossians 1:29, Romans 1:1) and above life’s circumstances (2 Cor. 12:9-10).  If it is the Gospel we truly seek to further, we would do well to take heed to Paul’s teaching on contentment.