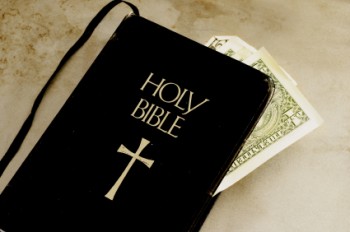 God made it clear to His people from the earliest days that He required them to give back to Him.  He asked for the firstfruits of their labor; He wanted the first and the best. These firstfruits were symbolic of God’s claim to all that His people produced.  By giving away the first and best, God’s people were acknowledging that all of it was truly His.  If they had given the last and lowest quality, it would have been an indication that their personal wealth and production belonged to them.  God asked for the best, and that is what the people were to give Him as their joyful duty.

God was also specific about the amount He wanted.  It was called a tithe.  He first announced this law in Leviticus 27:30 where He says, “Thus all the tithe of the land, of the seed of the land or of the fruit of the tree, is the LORD’S; it is holy to the LORD.”  The Hebrew word for tithe, MAASER, means one tenth.  Ten percent of the harvest was to be given to the Lord.  In that day, the people did not deal in currency as much as in produce and goods, so that is what the Lord required them to give.  No matter what line of work you were in, you were required to bring a tenth of it to the Lord—the first and best tenth.

Parenthetically, it is important to note that the tithe is always ten percent.  It is not a word that means giving or donating, but a word describing that very specific percentage.

“Actually, there was not just one tithe for Israelites, but three. One tithe supported the priests and Levites (Num 18:21, 24), another provided for a sacred festival (Deut 12:17-18; 14:23), and the third tithe supported orphans, widows, and the poor (Deut 14:28-29; 26:12-13).
The Levite and festival tithes were perpetual tithes, but the tithe for the poor was collected only every third year. This amounted to an average of 23% per year. Because Israel was a nation as well as a spiritual community, some of these funds would equate to taxes that we pay today. However, the first and most basic tithe was for religious purposes, specifically to support the spiritual leaders, freeing them up to fulfill God’s calling, and providing the resources necessary to do their job well.”
(Randy Alcorn, Money, Possessions and Eternity, 174-5.)