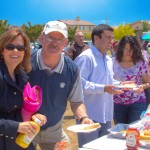 Our RMG launched. We met at a park for a potluck fellowship – basic church stuff. To be honest, I was a little unsure as we set up of how well the evening would work.

When carrying a folding table back to the truck after it was over, I was greatly encouraged about the “RMG thing,” and it had little to do with the fried chicken, pasta salad, chips and cookies I had eaten.

I was struck by how quickly thirty-some men and women, couples and singles, young and younger came together. Some already knew one another, and some knew hardly anyone. Some had been at FBC for a while, and some had been there for a short time. Some were excited about the RMG, and some were testing the waters. A few were mostly interested in playing… granted they were 3-7 years old. Despite all the differences, it ended as a body of believers, not just a group of people.

I watched excitedly as the dynamic of our fellowship shifted from casual to intentional after we had a brief exhortation from scripture regarding our purpose. It was clear that our most common denominator was God’s Word.

So as I carried out our table, I was reminded of the scripture in Hebrews, “ … let us consider how to stir up one another to love and good works, not neglecting to meet together … encouraging one another, and all the more as you see the Day drawing near … ”

That passage encouraged me most in light of our first RMG. While the RMG is about solid teaching, strong discipleship and good Christian fellowship, it is mostly about being obedient to God, and we were walking in obedience.