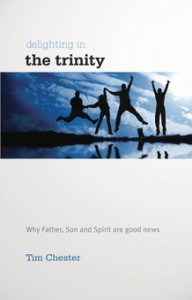 Name the most challenging doctrine in the Bible. Which one is hardest to understand and explain to someone? Election? That’s a tough one, for sure. The end times, with the rapture, Tribulation, Millennium and all that goes with it? There’s a lot to learn in that area, no doubt about it. How about the Trinity? That would get a lot of votes! Not only is it a challenge to understand, but it also makes you wonder why it is so important. Tim Chester has written a book, Delighting in the Trinity, that will help with all of that. It’s our book of the month for September.

Just a quick word about the author first. Tim Chester has written a lot of books. My favorite is You Can Change. It’s great for discipleship and Christlikeness. Chester is easy to read, practical, and always helpful. You will find that he can take this tough doctrine of the Trinity and make it easier. Notice, I did not say it will be easy! But it will be easier.

How does he make it easier? He divides his book into three sections. The first section deals with the Biblical foundations. You have to start there. What does the Bible say about the Trinity? Where do we find it in the Bible? Chester uses both the Old and New Testaments to show the facts that God is One, but that He is also plural. Then he shows how the Trinity is seen at the Cross.

In the second section Chester looks at how the Church has historically handled the Trinity. Dividing church history into various chunks, he shows how the doctrine developed over a period of time. The first time period is the early church in the first three hundred years where the doctrine was argued and developed and finalized with the Nicene Creed. He describes the doctrine that today is called modalism (God is sometimes the Father, sometimes, the Son, and sometimes the Spirit). Then he takes the time period from the fifth century through the Reformation period in the sixteenth century. Finally, he discusses how the Trinity has been handled in the last three hundred years or so.

The final section is called Practical Implications. He doesn’t show so much how the Trinity affects our daily living (as the title might suggest), but how the Trinity is important to what we believe about things like revelation, and he wrote an excellent chapter on the Trinity being seen in our salvation. The Trinity also is shown to have an influence on how we view our community relationship with the church.

Finally, Chester shows the practical impact that the Trinity has on our mission as a Church. He started his book with a frustrating experience he had in discussing the gospel and the Trinity with two Muslim friends, and he concludes the book with how he would engage these same two people now that he has a better grasp of the Trinity.

Here is how Chester begins his book: “Many people claim to believe in God, but have no time for Him. That is because their “god” is remote and uninvolved. The triune God sent His Son into history so that we could know Him as our Father, and He sends His Spirit to accompany us in the struggles of life.” In a nutshell, that is what the Trinity is all about. And that’s what Tim Chester accomplishes in his book.

If you need help with the tough doctrine of the Trinity (and who doesn’t?), this book will help you. Don’t plan on reading it quickly. Challenging information takes time. This is no exception. But, please, take the time. It’s an important part of what we believe, and this book will prepare you to explain it to someone who has a difficult time understanding it.