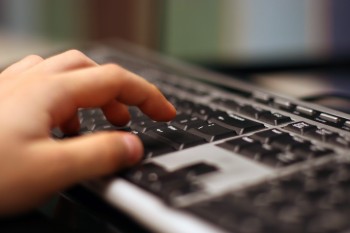 Her family is perfect! Four beautiful, always-coordinating, perfectly well-behaved children and a husband who adores her. She’s a size “0” who dresses like a magazine ad and cares for her perfectly spotless home… Who is she? Every friend you have on Facebook!

It can be overwhelming when we start comparing our lives to others, but social media has put that process into hyper mode. Instead of just comparing ourselves to women we see all the time and actually have a possibility of seeing their faults, we start to compare ourselves to the social site facade. Have you ever seen a post and thought, “how does she do it? I could never be like that!”? We’ll chances are, she is not like “that” either. I don’t know about you, but I’m not posting unflattering pictures of myself (but I am I un-tagging myself when others do… JK). And I’m definitely not talking about how horribly sinful I am. No way! We are all posting the best of ourselves, our spouses (hopefully) and our children. We aren’t posting pictures of us meting down in the evening with the caption, “totally skipped my time in the Word and spent all day living for myself!” No, we are posting pictures of our Bibles opened and highlighted with a beautifully crafted latte.

So why are we comparing our real lives to the lives we see on Facebook? Why do we care if someone was invited to an event that we weren’t invited to? I believe the root of the issue is pride. We pridefully find our identity and value in how others see us instead of what Christ did for us. We aren’t content in knowing that the same God who created the stars in the sky and the prints on our fingers humbled Himself to human form to die in our place.  Somehow that’s not enough. We need to be seen as better than others, which is the complete opposite of what Paul thought.

1 Timothy 1:15: “The saying is trustworthy and deserving of full acceptance, that Christ Jesus came into the world to save sinners, of whom I am the foremost.”

Paul, who penned most of the New Testament, sees himself as the worst of all sinners saved by God for God. He also constantly identifies himself, not in how others view him, but in being a bondservant of Christ! Paul’s entire identity rests in Christ. I find it hard to believe that anyone with that mindset would sit down and start focusing on themselves when they check their facebook. Instead, Paul would rejoice for others and be content with where God has him.

At the end of the day, we are accountable to God for our use of time, our actions and even the thoughts we entertain. It doesn’t matter if Suzie Homemaker just finished sewing 500 stockings for the homeless or if Little Miss Martha’s party looked like a Pinterest explosion. What matters is that you love God and put your faith in Him. Seek His will for your day and serve Him. Remember that a perfect and holy God took on your sin because He loved you, so find your identity in Him. You have an invitation to spend eternity with Him, so who cares if you were invited to someone’s BBQ? You are gifted in a special and unique way to build up the body of Christ, so focus on using your own gifting to serve and glorify God instead of being jealous of others.

Despite what we’d like to think, Facebook doesn’t make us sin- it merely provides a catalyst to expose the sin that is already in our hearts. There are some women so greatly tempted to sin through Facebook that they close their accounts, and that’s okay, but don’t stop there. Deal with the root of your sin and stop comparing the in-surpassing joy of being known by Christ to the Facebook facade.