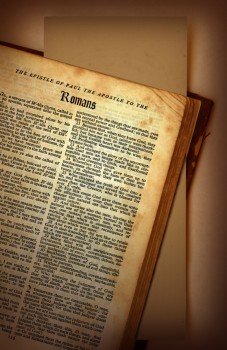 In Romans 1:11-12, Paul tells the Romans, “For I long to see you, that I may impart to you some spiritual gift to strengthen you – that is, that we may be mutually encouraged by each other’s faith, both yours and mine.”  Over the summer we have been studying Romans as we’ve geared up to launch an RMG. In the first few verses of the book, I’ve been so encouraged by who Paul is and his attitude toward ministry. I thought it is so appropriate and applicable to us as a church as we start the new school and ministry year.

We see Paul’s heart as he expresses his longing to be with the Romans to encourage them and to be encouraged. I love how Paul’s humility is truly demonstrated. He had a much greater knowledge of Scripture, was a gifted apostle and had truth revealed to himself directly from God, yet he says he is eager to be encouraged by the Romans and doesn’t think that he already knows everything that they have to offer. He approached them with a humble attitude and was ready to learn and be fortified by them.  Shouldn’t this be our heart too as we gather each week in our various ministries?

In response to these verses, John Calvin writes, “Note how modestly he expresses what he feels by not refusing to seek strengthening from inexperienced beginners. He means what he says, too, for there is none so void of gifts in the Church of Christ who cannot in some measure contribute to our spiritual progress. Ill will and pride, however, prevent our deriving such benefit from one another.” (The Epistle of Paul the Apostle to the Romans and to the Thessalonians, pg. 24)

We are blessed to be part of a church that highly values discipleship and accountability. As I listened to members of our discipleship group last week express what they were looking forward to most this year in our RMG, the overwhelming response was change and conviction of sin implemented through the Scripture and through the encouragement/accountability of others. The key behind this change though is a humble spirit. Later on in Romans, Paul says:

“For by the grace given to me I say to everyone among you not to think of himself more highly than he ought to thing, but to think with sober judgment…For as in one body we have many members, and the members do not all have the same function.” (Romans 12:3a, 4)

He goes on to explain the spiritual gifts. All believers have been gifted in unique ways, therefore we can all have something to contribute or encourage someone with.  I admit that I can often feel intimidated by someone older or more knowledgeable in the Bible and think that nothing I say will be anything that they haven’t heard before.  That is sin, though, since I am fearing man instead of God. Whether we are young or old, immature or mature, knowledgeable or a brand new Christian, as Christ is daily sanctifying us, we can all be used by God to exhort another brother or sister.  Let’s imitate Paul’s humility and long to be mutually encouraged by each other in each ministry that we serve in this year!