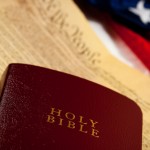 How does the Church engage the culture if it doesn’t adopt the Moral Majority model? 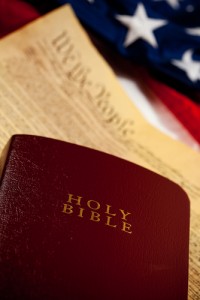 The apostle Paul would be the first to declare that rights of life, liberty and pursuit of happiness are relative. Scripture’s reminder to Christians is, in general terms, to hold rights subordinate to responsibilities. While the Bible does not promise religious liberty to any individual or country, much less the United States of America, it does promise persecution.

Paul touches on such responsibilities in his concluding statement in 1 Corinthians 15. He declares that if we really believe, and if we are truly thankful that our resurrection is sure, we should “therefore” demonstrate our assurance and our thankfulness by “standing firm, letting nothing move us” and “always giving ourselves fully to the work of the Lord” (1 Corinthians 15:58).

We must also recognize in whom is our primary personal identity and where our ultimate citizenship lies. Am I an American who happens to be a Christian, or a Christian who, by God’s grace, is fortunate to be an American? Is my ultimate goal to help create a utopian state here on Earth, or to live a holy life while I’m here, so that I may live an eternal life in a new earth with a perfect government under the perfect rule of Jesus Christ?

Finally, it might do us well to review the history of the Church for the past 2,000 years from Jerusalem to all parts of the world. There have only been relatively short periods of time (the early sacral Roman state under Constantine, and roughly 300 years in the Colonies and the United States, to name a couple) that the Church has not been at odds with the indigenous culture or the established religions of the time. MacArthur, in his address to Grace Community Church on July 19, reminded the congregation that true believers in Jesus Christ have always been the minority throughout history.

With respect to the culture, pastor and author Ed Stetzer says, “The Church doesn’t know whether to battle it, defeat it, slay it, withdraw from it, or embrace it.” Even the most ardent Christian political activist over the past forty years would be hard-pressed to place a positive spin on the results of his efforts to battle and defeat it. If for no other reasons than Christians have become marginally relevant to it and Scripture gives us no direction to slay the culture, we must move on to the last two choices.

So, do we withdraw from or embrace the culture? Frankly, there is no option to withdraw. In John 17:14-19, Jesus doesn’t ask the Father for His disciples to be taken out of the world, but He prays for them as they are sent into the world. The apostle Paul was insulted, beaten, imprisoned and run out of town on several occasions as he confronted various cultures of the Roman Empire to spread the Gospel.

Russell Moore stresses that this is also not a time for Christians to tone down or modify their understanding of biblical ethics to suit the culture. MacArthur, addressing the congregation of Grace Community Church (in reference to June 26 SCOTUS), was emphatic when he proclaimed, “We will not bow.” Ligon Duncan, chancellor of Reformed Theological Seminary, states, “I don’t want to try to fool the culture by being ambiguous in those areas where Christian truth claims come into conflict with cultural norms or views.”

At a time when our belief system has become diametrically opposed to the cultural norm, we may be required to be courageous, but we must also be clear on what Scripture says, and be prepared to dialog intelligently with those who disagree. The prophet Daniel, captive of the most powerful kings in the world, and Paul, a captive of Caesar Nero, the most powerful figure in the world of his time, give us examples of faithfulness and courage. But they also were articulate apologists.

If Christians choose to take a stand on Scripture and not withdraw from it, they will by default confront the culture and persecution will follow. Albert Mohler warns, “To proclaim biblical truth to this culture is to risk social isolation, outright rejection, and, in some cases, potent attacks.” Those attacks may include the very real possibility that churches, church-sponsored ministries and individual donors could lose their tax breaks. Businesses are already being fined or threatened with closure, and employees risk termination or forced resignation.

If we shun the political activism model of the Moral Majority, how do individuals engage the culture? Bill Taylor, Executive Director of the Evangelical Free Church of Canada suggests, “Perhaps we need to act more like a persecuted minority and adopt a subversive leavening strategy in the culture, rather than taking the demanding stance of the moral majority. Why not lead with what we are known for rather than being known mostly for what we lobby, march and rail against?” Ed Stetzer states, “American evangelicalism must learn how to engage the culture from the edges instead of the center.”

Russell Moore argues that a successful evangelical political engagement in contemporary America requires an abandonment of what he calls “the tribal mentality.” He says, “You can’t say ‘what’s my tribe and how do I make sure that I am safely in my tribe all the time?’ Instead, you’re on a mission with Christ, which means you’re talking with people that disagree with you.”

Jim Daly, President and CEO of Focus on the Family, stresses, “A revived evangelical political engagement starts with reformation among Christian leadership. You’re not a Christian leader without humility. You need humility to lead. You need to have a heart that seeks to be servant both for the saved and the unsaved.” He added, “The Scripture says love your neighbor. How have you done that?”

As Christians equip and prepare themselves for the fallout from SCOTUS June 26, they may want to consider John Calvin’s caution to the Church. Calvin reminds us, we can “admonish the authorities as to what God’s law says, but cannot determine how that law is to be applied in matters of civil jurisdiction.” We can attempt to replace legislators through the voting process or recall. However, even the most sincere efforts to counter an evil may so contradict the culture that our efforts are rejected categorically.

That should never restrain the body of Christ from expressing itself in the public square. As long as Christians maintain their First Amendment rights of freedom of speech and religion (see Part III of this essay) they should continue to present the Bible’s position on public policy that conflict with it. It is also vital that in whatever medium Christians use, their presentation should always be with a balance of grace and truth.

Next time: What part does the citizen Christian play in his/her government?