I think it is really
important for our mission here and for our own spiritual growth that we respond
biblically to the election of Barack Obama as president. 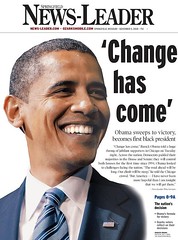 The two
of you that voted for Obama won’t need this, but for the rest of you: please prayerfully consider your biblical obligations to
Barack Obama when he takes over the presidency.

1.)
Submit to President Barack Obama as God’s Sovereign Choice for Our
Country

We are to submit to the
leaders God has put over us unless submitting to them we cause us to sin God
(Acts 4:19-20).  This command is actually much easier for us to do than it
was for the believers it was first written to.  Their emperor was Nero, who liked
to light Christians on fire and feed them to wild animals and yet they were
called to submit to him.  Surely, out of love for our God, we can joyfully
submit to Barack Obama as our president.  God has not given us a command
that is too difficult here (I John 5:3).

We are to respect Barack
Obama.  During the Clinton years it was far too common for Christians to
disparage their president through bumper stickers, t-shirts, and the comments
they made.  If that is your impulse, please grow up.  God commands us
to show honor to our leaders.  It is unacceptable for Christians to speak
disrespectfully of their president.  You can (and should) speak out against
his policies, you can even get involved in four years to remove him, but while
he is president you must speak respectfully of him.

Once again the emperor
Peter was talking about here was Nero, who by the way was not an elected
figure, they had no say in who the emperor was.  In obedience to God,
watch how you talk about our president.

If you have never been in
the habit of praying daily for the president, this would be an excellent time
to start.  President Obama has a lot of challenges ahead of him.
Pray for him everyday.  Pray that God would reveal himself to him,
bless him, give him wisdom, and keep him safe.  We are teaching our boys
to do this every day.

It is
interesting that when Daniel found out that judgment was going to come upon
Nebuchadnezzar (Daniel 4:19) he was visible shaken and declare that he
wished it would happen to the king’s enemies instead.  And Nebuchadnezzar
wasn’t really the king you would want, now was he? – trying to BBQ Daniel’s
friends and all.  And yet Daniel cared about him and wanted him to be
blessed, not judged.  You can have that same spirit towards Barack Obama
as you pray that God would reveal himself to him, bless him, give him
wisdom, and keep him safe.

For the
next few days as you talk with believers and unbelievers about the outcome of
this election you have an opportunity to be refreshingly biblical – and truly
counter-cultural.  Let’s show the world (and other believers) that
Christians are not a bunch of cry babies and sore losers who put all their
hopes in having political power.  Whining, fear, and bitterness are not
fitting for us who believe God is up to something in all that he ordains.
Let’s show the world (and other Christians) that we have a happy trust in
God’s sovereignty.  Let’s show them that we are prepared to joyfully
submitting to, respect, and pray for Barack Obama, out of a deep trust in and
love for our God.  Or…..you can do just what the culture expects you
to.

Keep in
mind our cause, the spread of the Gospel of the Kingdom of God, does not depend
on having political power.  In fact, our cause has most often thrived when
it had no such advantages!  The Kingdom is breaking in even now, the
fullness of it will soon appear!