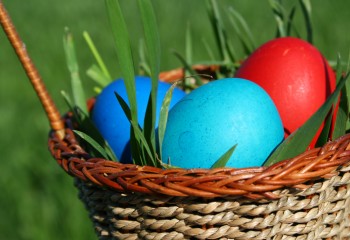 What happens when you combine 300 gallons of water, six gallons of gasoline, helium gas, 650 eggs and the kinetic energy generated by 150 very active people?

To be honest, I don’t really know. Wikipedia and Siri had no answer for me. Regardless of what it is, I am sure it would be a mess and maybe a small disaster.

But, I do know what you get when you add one more ingredient, called the Gospel. Then, it is something altogether different and wonderful: the Menifee RMG “Easter Eggstravaganza”!

Let me explain a little bit more. A few weeks ago, our RMG announced to the families in the neighborhood that we were going to have a little carnival – the “Easter Eggstravaganza” –in the nearby park and that we would love for them to join us. A couple of weeks later, that small park was filled with a dunk tank, jolly jump, football toss, putting green, snake-pit, softball throw, animal balloons, face painting, a cupcake contest, snacks, a DJ blasting great music, 650 plastic eggs filled with goodies and over 150 people.  It was a spectacular site!

Was it hard work? Absolutely! The men (I do want to emphasize “men” here to ensure I do not mar the intellectual intuitiveness of our wives who were raising some fairly good questions at the time) planned a dunk tank that we had to pull—by hand—across 200 yards, knowing we had to hand carry all of the water TO the dunk tank. Yep, a 300-gallon dunk tank with no nearby water source. But, our “Tim the Tool Man Taylor” moment was just as we planned it — a big hit!

And, it took the ladies in our group hours upon hours to fill 650 eggs, only to have them captured and opened in less than five minutes. The run of the bulls in Spain has nothing on a mass of 2-4-year-olds and their parents trying to capture the most eggs.

Needless to say, there were lots of sore backs, wounded knees, stiff joints and strained muscles and also a couple of cuts by the end of the day. That said, three specific things made every ache, pull, drop of blood and bead of sweat worth it all.

The First: the smiling and laughing faces of the families and children in the neighborhood enjoying the benefits of our labor and actually making the load seem lighter as the afternoon passed.

The Second: the wonderful fellowship of faithful brothers and sisters in the Lord serving together to fulfill one of the greater purposes of the RMG ministry – to evangelize. It really was a joyous experience.

The Third: watching as everyone gathered around as we shared the true meaning of Easter—the depravity of the human heart that demands the need of a perfect sacrifice and the solution, our Savior and Lord, Jesus Christ, who did die on the cross but has risen and desires a personal relationship with us—and to know this impacted lives!

In so many ways, we fulfilled our purpose as an RMG that day, and, more importantly, as children of God. The RMG’s are a real extension of FBC and I can honestly say—in love—that you are missing out if you are not a part of some ministry in our church. So, get involved!