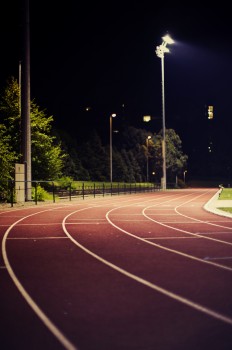 Movies based on a true story often must rely on artistic license and/or exaggeration in order to make them more interesting.  There is one person for whom few—if any—exaggerations are needed to embellish the account of his life. Eric Liddell was 5’8”, 150 lbs. and died at the relatively young age of 43, but his influence on society—and even more importantly for God’s kingdom—extends well beyond his physical stature and short lifespan.

The great Scottish runner of the early 20th Century was introduced to the wider population through the 1981 Academy Award Best Picture Chariots of Fire. Though a great film and even better story, after my original viewing of Chariots I thought some of the scenes must be grossly exaggerated. Liddell’s running style, for example, looked so unorthodox as to be laughable. As a sprinter and track coach, I had even more difficulty with the scene where he is knocked to the ground during the 440-yard run (yes, it was 440 yards, not meters) in a major European track meet, falls behind by 20 yards, gets up, catches the field and wins the race by two yards.

There was one problem with my skepticism, however. Both depictions are true and verifiable. Photographs and film authenticate his running style and the documented race where he falls down differs from reality only in the fact that the dual meet depicted in the movie between France and Scotland was in actuality a triangular meet between England, Ireland and Scotland.

Liddell’s accomplishments on the athletic fields are truly legendary. By age fifteen he was captain of the cricket and rugby teams at Eltham College, and at sixteen he was running world class times in the 100- and 200-meters. During his years at the University of Edinburgh, he was considered by many observers to be the best back fielder in European rugby. His skill set may have made him the equivalent of American contemporaries sprinter Jesse Owens, baseball’s Ty Cobb and football legend Harold Edward “Red” Grange, all wrapped up in one.

In the movie, Liddell’s exaggerated rivalry with Britain’s other great sprinter of the same era, Harold Abrahams, sets the stage for his historic decision not to run the 100-meters in the 1924 Olympics. When Liddell discovered that the preliminaries for the race fell on a Sunday, at the risk of becoming a national disgrace, he graciously informed the British Olympic Committee that he never ran on Sunday. He believed that running on Sunday would bring honor to himself over remembering God’s day of rest. What made his decision even more difficult for Britain’s Olympic officials to reconcile was that Liddell was considered the world’s best 100-meter sprinter and the favorite to win the gold medal.

Contrary to the movie version where Liddell pulls out of the 100-meters less than two weeks before the race causing a near national crisis, he actually made his decision about four months earlier. The thinly veiled criticism he endured from the British press for doing so was apparently much more intense than that depicted in the movie. [Note: Because the 4 x 100 and 4 x 400 relays also required qualifying on a Sunday, he did not run in either of those events. Abrahams, who had never beaten Liddell, won the Olympic gold medal in the 100 and ran the first leg for Britain’s silver medal-winning 4 x 100 relay team. The British 4 x 400 relay team garnered the bronze medal. Liddell’s participation in the relays would likely have sealed victories for his country in both events.]

In the Olympic race final Liddell drew the outside lane, the worst possible for the 400-meters. Runners must stay in their lanes from start to finish, and the outside runner is unable to gauge where he is in relation to the rest of the field. Liddell sprinted out quickly and was well ahead of the rest of the field at 200 meters. He held on to win by five meters in a new Olympic and World Record of 47.6 seconds. His victory was hailed by the press as the greatest achievement of any athlete in the games.

If Liddell’s athletic prowess set him apart from all but a handful of men who lived during his time, his outward devotion to Jesus Christ did likewise. He graduated from the University of Edinburgh shortly after the Olympic Games and could have easily used his athletic ability, fame and education to generate great personal wealth. Instead, only one year after his dramatic victory he returned to the country of his birth, China, as the missionary he was confident God had called him to be many years earlier. The Bachelor of Science degree in Pure Science that he earned was always planned to give him the background he needed to teach in Chinese schools.

Liddell hadn’t removed himself from the 100-meter run and relay competitions as a simple “religious” gesture, nor did he possess some misguided martyr complex. He knew that he was blessed with an ability to run faster than almost anyone else on earth. He was also aware that the blessing could have very easily become an idol. One of the ways in which he could demonstrate his love for Christ was to honor Him every Sunday by not running. Because his focus was squarely on the Gospel, it was infinitely more important to honor the Lord in the best manner he knew how, even if it meant not running in the most important races in his life.

Liddell’s actions were reminiscent of the Old Testament book of Daniel story about the three Jewish captives of Babylon, Shadrach, Meshach and Abednego. They believed God could deliver them from the fiery furnace, but they also knew there was a possibility He would not. That made no difference in their decision to honor Him by refusing to worship the king’s golden image. We read further in Daniel to discover that not only were their lives spared, but God was glorified well beyond what the three young men could have imagined. The man who condemned them, King Nebuchadnezzar, the ruthless ruler of the known world, eventually came to believe in the God he originally blasphemed.

Though Liddell’s life wasn’t on the line when he made his stand, his reputation with the decidedly worldly-focused nation of Great Britain certainly was. His decision, especially in the face of hostile criticism, ended up giving greater glory to God than had he compromised. Yes, Liddell redeemed himself in the eyes of a fickle British nation by winning a gold medal in the most dramatic fashion, but much more importantly, his Gospel-centered life produced valuable treasures in heaven.